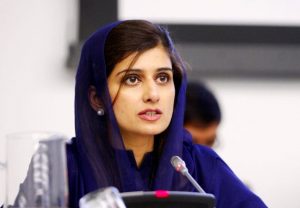 Foreign Affairs are the category of a government department. It is all the more responsible for the state’s diplomacy. It is also set up as in providing support for a country’s citizens who have settled abroad. Hina Rabbani Khar was the very first foreign minister of Pakistan. She has served as being the 21st Foreign Minister of Pakistan from February 2011 until March 2013.  However, she was appointed to this position at the age of 33. Furthermore, she was the youngest person on this seat ever.  She has studied the early education from LUMS and Amherst as she stepped into the political world.  In 2002 she remained as the member of the national assembly where she represented PML-Q.

In 2009 she switches the party and joined Pakistan People’s Party in which she became the Minister of State for Finance and Economic Affairs.  Seems like, in the same year, she even stood to be the first woman to present the national budget. She is still working for PPP party and is acting as the public speaker on foreign policy standards.  Hence, she has always made efforts in pushing to some stronger bonds with India. Do you know Who was the first education minister of Pakistan?