Home / Islam / Hajj is Not Completed Unless You Go To?

Hajj is Not Completed Unless You Go To?


Question: Hajj is Not Completed Unless You Go To?

Hajj is Not Completed Unless You Go To Arafat 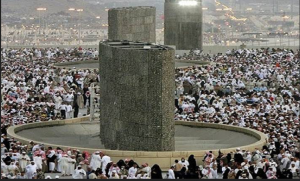 Hajj is known as the annual Islamic pilgrimage to Mecca that is the holiest city for Muslims. It consideres to be the mandatory religious duty for Muslims. Arafat is the level area that is surrounding the hillside. The term name of Mount Arafat is most of the time applied to the whole of the area. It is an important part of Hajj because pilgrims will spend the time of afternoon on the ninth day of Dhul Hajj at this place. The Day of Arafat is the Islamic holiday that normally falls on the 9th day of Dhu al-Hijjah of the lunar Islamic Calendar. It marks to be the second day of the Hajj pilgrimage. The day after this day is the first day for the Eid ul Adha.

The Prophet ﷺ said: “(The essence of) Hajj is Arafah.” Hajj is completely invalid if the pilgrim will be failed to spend the required time at the place of Arafah. Hence, they have to move in the direction of the plain of Arafat on the 9th day after praying Fajr at Mina. Do you know Imam-e-Darul Hijra was the title of which sahaba?