Home / Pak Info / Importance of 28th May in Pakistan

Importance of 28th May in Pakistan


The history pages of Pakistan will always remember the date of 28th May 1998. This date will always be written in the golden words for sure. 28th May in Pakistan,1998 is the day in the history timeline of Pakistan when Pakistan conducted the successful operation of the nuclear tests in the hills of Ras Koh at Chagi, Balochistan. This test made Pakistan is the world’s 7th and Islamic world’s 1st atomic power. This underground test held at the Ras Koh mountain range. The operation testing was so strong. It did shake the entire mountains and dust to be seen as flying in the air.

Importance of 28th May in Pakistan

The setting of the nuclear programme of Pakistan put in motion at the time when India tested its first nuclear test at Pokhran in the year 1974. This somehow given a clear piece of intimidation for the Pakistan.  Since the time of Independence 1947, Pakistan has many times given a form of threat by India. That had never reconciled with the division of the united India after the departure of the British.  Both of these countries had gone for the face to face war almost three times over the dispute issue on state of Jammu and Kashmir.

In the year 1970, Indian came up with the launch of the important operation in the Eastern wing of Pakistan. It detached from the mainland Western Pakistan at the distance of around 1,000 miles.  In May 1998 India again test so many of the nuclear operations just to show out their nuclear stamina to Pakistan. Despite being having massive pressure from United States, they successfully conducted the nuclear operation on 28th May 1998 after a long silence wait. 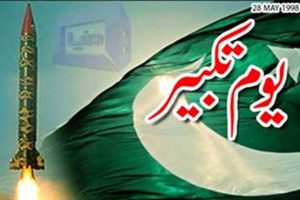 Chagai-I named to be the code of five simultaneous underground nuclear tests that conducted by Pakistan at 15:15 hrs PST on 28 May 1998. This test was all the more performed at Ras Koh Hills in the Chagai District of Balochistan Province. Chagai-I mentioned to be the Pakistan’s first public test of nuclear weapons. Its timing was taken to be the direct response to India’s second nuclear tests. That was on 11 and 13 May 1998.  This nuclear test by Pakistan and India resulted into the United Nations Security Council Resolution 1172. All through by testing nuclear devices, Pakistan made itself to be the seventh nation to publicly test nuclear weapons.

On the contrary, Pakistan did with the second nuclear test named as Chagai-II to be followed on 30 May 1998. Hence, 28th May in Pakistan marked as the hallmark proud moment in the historical pages of Pakistan. Do you know when did Pakistan Pakistan became the member of UNO?