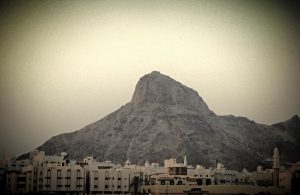 Jabal-e-Noor is famous in the Islamic world as it is situated on Ghar e Hira. It has the termed meaning as a mountain of light or hill of illumination. Jabal al-Noor is termed in English by the meaning of “Mountain of Light”, or even the “Hill of Illumination” as well as “Hill of Enlightenment”. It is basically known as the mountain that is located near Makkah in Saudi Arabia Hejaz region. Jabel Al-Noor is marked to be one of the popular places in the Makkah as because of Ghar-e-Hira situated on it. It constructed as the small cave with just the four arm’s length long by 1.75 arm’s length wide as well as 640m tall. Just five people can sit on it at one time.

It would take two long hours to reach the cave locations. This cave is holding a sign and holiest place for the Muslims. It is different from other hills and mountains because of the summit that is strange looking. Hence, this makes it appear just like two mountains on top of each other. Do you want to know where Masjid-e-Qiblatain is situated? if not just click here!