Quaid-e-Azam was the first head and prestigious leader of Pakistan so here we are going to discuss that Who Offered Funeral Prayer of Quaid E Azam?. He plays an important and memorable role in the movement of creation of Pakistan. He was one of the leading personalities of Pakistan and also called the father of the nation. Jinnah is the first founder and Architected of Pakistan. He was born on 25th of Dec, 1876 in a noble family of Karachi. His father name was Jinnah Poonja and his mother name was Mithibai. Quaid-e-Azam was the eldest child of his family. Muhammad Ali Jinnah was very talented and able person.

He had done very memorable and leading work in the field of law and politics. The Jinnah’s work toward a new nation is very remarkable and memorable in the history of Pakistan. Our nation and Government had done so many things in the memory of Muhammad Ali Jinnah.

Quaid-e-Azam, the father of Nation, the proud of Pakistan forwards the motto of “Unity, Faith, and Discipline”. He was the sole leader who works for the National Interested rather than the personal interest.

In spite of great struggle for getting a new nation, this talented man cannot live long. He had been suffering from tuberculosis which leads to lungs cancer and he died on 11th of September on 1948. The government of Pakistan has constructed big mausoleum at the funeral place of Jinnah. His house named Jinnah house is still under the possession of the Government of India which still is the big conflict to be solve and is not clear till now. 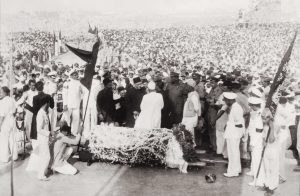 Allama Shabbir Ahmed Usmani Offered Funeral Prayer of Quaid E Azam at 3 p.m on Sunday, September, 11 in 1948. The father of nation breathes his last to his rest place. The Prime Minister of that time, Liaquat Ali Khan, and Ministers Zafarullah Khan, Sardar Abdur Rahman Nishtar, Peerzada Abdus Sattar, etc gave shoulders to the funeral of Quaid-e-Azam Muhammad Ali Jinnah and took him to the house of Governor-General in the main hall. Quaid was draped in Pakistan’s National Flag. He was taken to a gun carriage and the final state ceremonial funeral start by Allama Shabbir Ahmed Usmani as this is the person Who Offered Funeral Prayer of Quaid E Azam.

check out: Who Is The Great Leader Of Pakistan?

In the hearts of Pakistani nation, Quaid-e-Azam is still alive forever. Every year on 11th September several events organized in both government and nongovernment organization in the memory of our Nation’s Father “Quaid-e-Azam Muhammad Ali Jinnah”. May his soul rest in peace “Ameen”