Recently Ch. Shujaat Hussain launch a Sach to Yeh Hai Book. Ch. Shujaat Hussain is the former prime minister and president. He born in 1946 in Gujarat. He studied at the famous Forman Christian College Lahore. During his studies, his father became the wealthiest man and the great politician. ch.shujjat Hussain was also the member of Majlis-i-Shura which is made by Zia ul Haq. However, the main mover in 1988 and 1990 of the Islamic democratic alliance is ch.shujat Hussain.

The book entitled “Sach To Yeh HaiBook ” launched soon and will available on the market. Further more, when he was talking to the media on the joining of PML of KPK he said that the basics of the book are based on truth and the things he witnessed in his political career. 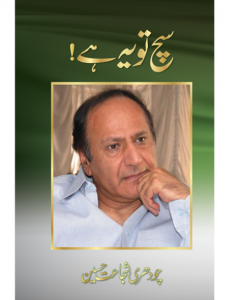 The main points that he discussed in his book are:

Hence, he said that the book is beautiful and the mixtures of truth and it are my humble opinion to read this book. In conclusion, he beautifully explained the politics and democratic projects.