Electricity is the biggest product of modern sciences. It is used to run industry and automobiles along with domestic purpose. Currently, electricity is being produced with different resources namely, Hydro energy, winds energy, waves energy, nuclear energy and many others. Nuclear electricity generation first was experimented on 3 September 1948 in the United States of America. After that, it was transferred to the other countries. KANUPP 1 was the first nuclear power plant was inaugurated in Karachi by Government of Pakistan in 1972. Four more power projects were installed after that and now out of total electricity consumption, nuclear projects are adding 1322 MW and accounting for 5.8 percent of total electricity. Pakistan has decided to launch more nuclear power projects that will be in the grid until the mid of running century. List of upcoming power projects is given below. 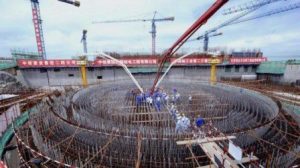 Karachi Nuclear power complex is being built in Karachi city at Paradise point. It is assumed to have a total capacity of 2200 MW electricity generation. It is being generated under the direction of both KANUPP and Pakistan atomic energy commission. It is intended that this power plant will be added in the grid in 2020. It was inaugurated in 2013 by the then prime minister Nawaz Shareef.

These both nuclear power plants are also the part of Karachi Nuclear Power complex. Both of these are being constructed under the same vigilance as that of Karachi nuclear power complex. With 9.5 billion $ worth of construction both projects will constitute in the main grid supply of Pakistan about 1100 MW in total.KANUPP-2 will be added in grid till 2019 and KANUPP 44will be the part of main supply grid in 2020

KANUPP-4 is also being planned to build in Karachi. It will be connected to grid till 2020

With a total capacity of 1000 MW, Muzaffargarh power plant is under construction. It is planned to build under china. It will be in the mainstream grid in 2020.

In March 2013 governments of both China and Pakistan decided unanimously to build a nuclear power plant with a total capacity of 1000 MW. Till 2020 it will also be the part of mother grid.

Around the world, electricity is being generated by nuclear power plants. Pakistan should take the major initiative in this field. By doing so Pakistan will help itself in a dual way; making electricity from nuclear energy, and avoiding too much spending on nuclear arms. International parliament should force countries to generate electricity with nuclear energy so that the threat of war be dashed to the ground.