Home / Pak Info / What Are The Main Points Of Indus Water Treaty?

What Are The Main Points Of Indus Water Treaty?


The Indus waters treaty was the big achievement of 1960. It was the result of nine years of negotiation between India and Pakistan. World Bank president Eugene black was the major stakeholder for the successful international binding. There are frequent tensions which link framework for irrigation and hydropower development at one single platform. The one bright spot for United States President Dwight Eisenhower is the only approach get intact with the What Are The Main Points Of Indus Water Treaty. The permanent Indus commission was built to handle the whole issue. Commission was responsible for resolving the issue with the questions explored further by the water conflict.

One commissioner from Pakistan and one commissioner from India selected to be members of this water treaty. Court of arbitration was built to make the seven members arbitrary approach. The World Bank role cannot ignore with respect to the Water Treaty. Differences are so strong that parties get attention towards the treaty. Commission was successful in maintaining the clauses in this treaty. The 330 megawatts Kishenganga hydroelectric power plant and Ratle 850 Megawatts plant was negated because of the technical features. Jhelum and the Chenab rivers tributaries were selected for the hydroelectric power plants.

What Are The Main Points Of Indus Water Treaty

Domestic, non consumptive and Agriculture are three clause agenda signed to let flow the water without any interference in Pakistan.

Pakistan can use water under this treaty as much as it can without disturbing natural flow in Pakistan.

Pakistan built the aforesaid discharge observation stations according to the treaty 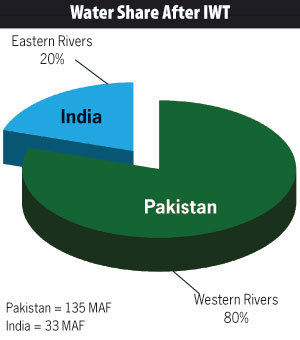 Disagreement on the mechanism to resolve the issue was the focus of World Bank.

December 12, 2016, was the date when World Bank president Jim Yong Kim paused the treaty and restricted to further goes with the neutral expert.

Check out this as well How Many Rivers Are There In Pakistan?

These are some points and partial answer for What Are The Main Points Of Indus Water Treaty?