Home / Who is Who / Who is the Current President of Azad Kashmir 2018?

Who is the Current President of Azad Kashmir 2018?


Question: Who is the Current President of Azad Kashmir 2018?

Sardar Masood Khan is the current President of Azad Kashmir 2018 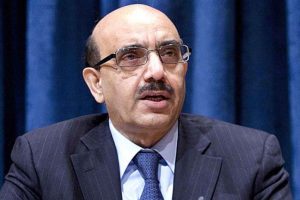 President is the one who decides the laws of the country that are to be enforced. He is the one who chooses officials and advisors to help run the Executive Branch. Hence, Sardar Masood Khan is the Azad Kashmiri diplomat who serves as the 27th President of Azad Jammu and Kashmir as in 2018. He made the joining in the Foreign Service of Pakistan in 1980. He did often went as to serve so many of the diplomatic positions too. However, from the year 2003 till the year 2005, he served as being the Spokesperson of the Ministry of Foreign Affairs and Pakistan’s Ambassador to China between September 2008 and September 2012. He even served as Pakistan’s Permanent Representative to the United Nations between October 11, 2012, and February 7, 2015.  Moreover, he did put the serving as the Director General of Institute of Strategic Studies Islamabad.

He appointed as being Pakistan’s permanent representative to United Nations Office at the place of Geneva in February 2005.  In this course of the time period, he was the chairman of so many forums. In such forums we add on with International Organization for Migration Council, Group of 77 and China at Geneva, as well as Government Group of International Labour Organization (ILO), Conference on Disarmament and also the Organisation of the Islamic Conference at Geneva. Do you know who is the current IG of Azad Jammu and Kashmir AJK?