Home / Who is Who / Who Is The First Lady Pilot of Pakistan?

Who Is The First Lady Pilot of Pakistan?


Question: Who Is The First Lady Pilot of Pakistan?

Today we take out the question about who is the first lady pilot of Pakistan? Here you will get the name of that person along with her complete profile. Airforce is the important forces of Pakistan. The pilot is one of the most important and responsible positions in Air Force. All crew present in the plane are dependent on pilots, pilot communicates with all higher authorities and with the crew during flights. The pilot is responsible for all the final decisions. The pilot must be a man but you are surprisingly amazed that, we are going to describe the first lady pilot of Pakistan. Just keep reading this article till the end will prod you to be a female! Scroll down this page now about to read the historical flashback behind this great lady.

Who is the First Lady Pilot of Pakistan 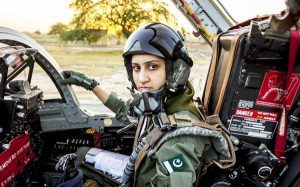 Women play an important role in our society. They are working side by side with men. Same is in Pakistan, our ladies are working hard. The biggest example is Ayesha Farooq the first lady pilot in Pakistan set the best example in our country.  She is the first war-ready female fighter pilot. Ayesha Farooq is tall, young, have impressive personality, soft spoken, down to Earth, she is as brave as lion and is ready to defend her country.  She flies Chinese F-7PG planes for Pakistan. But the most curious thing is to think how did she become so brave? How she became male dominated, how did flying corps come about? In childhood, she was the most innocent girl and she didn’t know how to play with dolls. Outdoor sports were her hobby.  She was three years old when her father died. Her father had great respect in the community, and people eyes filled with tears when they talk about her father. The profile showing characteristics of Who is the First Lady Pilot of Pakistan

Then she discovered, that “it doesn’t matter how people speak of you when you are alive what matters is how you remembered after you are gone”. She had the support of her mother; her mother plays an important role in her life and best inspiration for her. As she always worry about her and she advises her daughters to live independently for future. She always thinks that she will go in the field in which most women are out of reach of, and she always dreamed of women in uniform that is a symbol of respect. Her mother made her more determined and she trained her to face and deal with the challenges of her life.

Ayesha Farooq said, “My achievements and I all of it is a result of what my mother has done for me”. She gets enrolled in Aero Sciences and PAF is tough on grading. 89% is a failing percentage 90 above grade is a passing grade. She gets flying training course on P-37, and then flighter conversion unit and fly K-8.then she promoted to operational conversion unit and permitted to fly F-7S. These all training does not support the distinction between men and women as you are not trained as a pampered child. In 2007 she was a member of the first graduating batch.

Airforce is a field where you work and never feel isolated they work as a family. If we keep trying we can achieve anything in our life. Ayesha Farooq is so hard working and is ready to defend her country at any cost and according to her if war breaks out, she will be flying on her senior’s wing as “wing woman”.  She is a role model for all Pakistani girls.

These are all details about Who is the First Lady Pilot of Pakistan. Hope you are now well aware of this brave girl who first ever Aviate the Aircraft in pakistan.