Home / Pakistan General Knowledge MCQs / Who is the National Poet of Pakistan?

Who is the National Poet of Pakistan?


Question: Who is the National Poet of Pakistan?

Allama Mohammad Iqbal is the National Poet of Pakistan 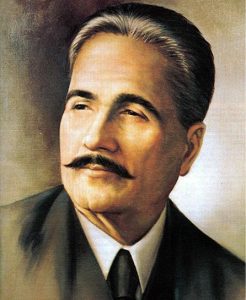 Allama Mohammad Iqbal had played a vital role in establishing Pakistan.  A separate nation for Muslims is the dream of Allama Iqbal. So, in such services he worked hard for Pakistan in true sense. Especially, his poetry had played back the important role for the Muslims. Allama Mohammad Iqbal is name as the national poet of Pakistan. He had often worked as the Indian Muslim poet, as well as a philosopher, and political leader.  Iqbal got early education from Government College. Later on, he went to Cambridge and the University of Munich.

Therefore, he had even taught philosophy at Government College and practiced law.  In 1927, he got elected to the Punjab provincial legislature. In 1930, he served as being the president of Muslim League. So, He was no doubt one of the most foremost Muslim thinkers of his time period. He had written many volumes of poetry in the languages of Urdu and Persian. Hence, Iqbal was a firm believer in freedom. He is also Known as Mufakir-e-Pakistan.