Home / Geography Of Pakistan / Smallest River of Punjab Pakistan is

Smallest River of Punjab Pakistan is 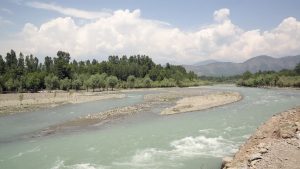 Punjab is the land of five rivers. But the smallest river is River Ravi. It is 720 km long. It starts from Himalayan region then flowing through Indian Punjab. after that enters into Lahore then merge with river Chenab. The river system of Pakistan originates from Himalayan and Karakoram Range. Ravi, Sutlej, Jhelum, Chenab and Indus are major fiver rivers of Pakistan. Like other rivers, Ravi River also originates from the Himalayan region.

Check out: How Many Rivers In Punjab Pakistan

Then it flows south-west region of Indian Punjab. in addition, it moves along the India Pakistan border. Unfortunately, the water of river Ravi allocates in India according to Indus water treaty. While, it is 720 km long. It is also known as River of Lahore. The city of Lahore is located on the Eastern bank of River Ravi. However, River Ravi changes its direction of flow with the passage of time. hope you get the answer of Smallest River of Punjab Pakistan is.

Karachi is situated on the bank of which river, just click here to know